Click on one of the physics simulations below... you'll see them animating in real time, and be able to interact with them by dragging objects or changing parameters like gravity.

There are several ways to reproduce a particular experimental setup. The easiest way is to click the "share" button.

When the recipient clicks the URL, the EasyScript that is embedded in the URL will replicate the conditions that you set up.

See Customizing myPhysicsLab Simulations for how to customize further with JavaScript or EasyScript.

myPhysicsLab is provided as open source software under the Apache 2.0 License. Source code is available at https://github.com/myphysicslab/myphysicslab. Online documentation is available.

There are around 50 different simulations in the source code, each of which has an example file which is mainly for development and testing. These can also be used to show simulations offline (when not connected to the internet).

The example files are available online in two forms:

How Does It Work?

Most of the simulation web pages show how the math is derived. See for example the Single Spring simulation.

The rigid body physics engine is the most sophisticated simulation shown here. It is capable of replicating all of the other more specialized simulations. The physics engine handles collisions and also calculates contact forces which allow objects to push against each other.

The myPhysicsLab simulations do not have units of measurements specified such as meters, kilograms, seconds. The units are dimensionless, they can be interpreted however you want, but they must be consistent within the simulation.

For example if we regard a unit of distance as one meter and a unit of time as one second, then a unit of velocity must be one meter/second.

See the discussion About Units Of Measurement in the myPhysicsLab Documentation.

Stay informed about new myPhysicsLab simulations and software. Low volume of email. We won't share your email address with anyone else. 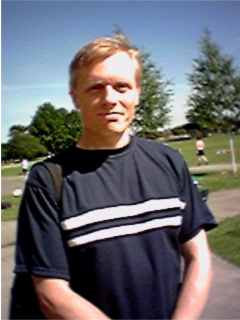 Hi, my name is Erik Neumann, I live in Seattle, WA, USA, and I am a self-employed software engineer. I started developing this website in 2001, both as a personal project to learn scientific computing, and with a vision of developing an online science museum. I grew up in Chicago near the Museum of Science and Industry which I loved to visit and learn about science and math.

I got a BA in Mathematics at Oberlin College, Ohio, 1978, and an MBA from Univerity of Chicago, 1984. My first software jobs were using the language APL which I enjoyed for its math-like conciseness and power.

I was fortunate to get involved in the Macintosh software industry early on in 1985, joining MacroMind, which became Macromedia. I led the software development at MacroMind as VP of Engineering for 5 years. Our most significant product was VideoWorks, which was renamed Director, and lives on today as Adobe Director. In the 1980's, the interactive multimedia concepts that are so common today were new and being developed. VideoWorks was mainly an animation tool, but also incorporated programmable interactivity. Our main competitors at that time were HyperCard, SuperCard, and Authorware. Director was used in many different ways; I am most proud that it became the preferred way to prototype software user interfaces for a time during the 90's. Director was also used to develop the introductory "guided tour" tutorial that came with the Macintosh in the early years. And of course, Director was used for all sorts of art, design, and marketing projects.

I went on to work at Apple Computer on new multimedia and user interface concepts involving digital agents, animated user interfaces, speech recognition and distributed information access. In 1991, there was a sudden flurry of activity when Apple and IBM were trying to set up a strategic partnership. I became involved in the super-secret negotiations, and made the suggestion that what the world needed was a standard for multimedia that multimedia content creators could rely on to publish to (ultimately this is what HTML became). Based on these suggestions, Kaleida Labs was founded. Our work there developed a product called ScriptX, which turned out to be very similar to Sun's Java which was being developed at the same time. ScriptX had goals of supporting all forms of multimedia: text, images, audio, video, animation; being cross-platform (Mac and Windows), interpreted, object oriented, with a garbage collector to manage memory.

I then moved to Seattle and turned my attention back to mathematics and science. I relearned calculus by doing all the problems in my old college text book and took further math classes at the University of Washington. I started developing this website as a way to practice what I was learning. I am now happy to use excellent tools such as HTML and JavaScript, and leave their development to others. I continue to work on physics simulations, with several new ones in development.